click image for larger view
We tend to think of soil as a renewal resource - one that is constantly being replenished by decaying matter. But worldwide trends suggest that we may need to rethink that common understanding, not because our scientific knowledge is flawed but because our behavior has resulted in depletion at rates tat exceed replenishment.  has somehow changed "It takes approximately 500 years to replace 25 millimeters (1 inch) of topsoil lost to erosion. The minimal soil depth for agricultural production is 150 millimeters. From this perspective, productive fertile soil is a nonrenewable, endangered ecosystem."
Source:  David Pimental, "Population Growth and the Environment: Planetary Stewardship," December 98.

Consider this quote also from Pimental et al in 1994: "During the past 40 years nearly one-third of the world's cropland (1.5 billion hectares) has been abandoned because of soil erosion and degradation."
Source: David Pimentel and Mario Giampietro, Food, Land, Population and the U.S. Economy,  Nov. 1994

So just how much useable soil do we need? Maybe we are "losing ground," but how much does that really matter to human well-being? Again, this quote from Pimentel and Giampietro is illuminating in view of the FAO graphic in the above left corner:
"In 1960, when the world population numbered only 3 billion, approximately 0.5 hectare of cropland per capita was available, the minimum area considered essential for the production of a diverse, healthy, nutritious diet of plant and animal products like that enjoyed widely in the United States and Europe."

The numbers are telling, and they carry us only through 2002. Things have changed over the last 10 years, in particular, the trend toward greater meat consumption. That means, among other things, that more land per person may be required to support a very much altered diet than the world as a whole enjoyed in 1960. How much will be enough going forward is a further question to consider.

This documentary seeks to re-conceptualize soil (more lovingly referred to as “dirt”) in an eco-cultural context that emphasizes its importance to the well-being of our planet and, more specifically, to human existence as we know it.  The film attacks a variety of modern and contemporary socio-political and ecological phenomena that threaten our global access to soil as an invaluable natural resource, including global urbanization, climate change, and industrialized agriculture.

The film is available for free streaming here.

Additional educational resources can be accessed through the film's official website.

The Global Scale and Consequences of Soil Degradation 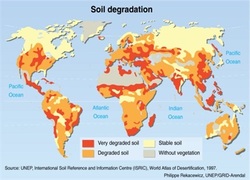 click image for larger view
A 2008 report entitled "Global soil degradation" estimated that land degradation (about 2 billion hectares of land worldwide) affects 38% of the world’s cropland and has reduced water and nutrient availability (quality and access). for perspective, that represents about 15 per cent of the Earth's land area (an area larger than the United States and Mexico combined) that has been degraded through human activities. The report was prepared by IAASTD - International assessment of agricultural science and technology for development, and authored by Philippe Rekacewicz, UNEP/GRID-Arendal.

See also, a similar estimate presented at the World Summit on Sustainable Development 2002, "A Framework for Action on Biodiversity and Ecosystem Management."

Differences in Causes and types of Soil Degradation 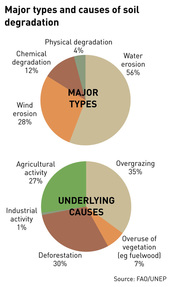 click image for larger view
There are differences in the types and causes of soil degradation around the world. In some regions, overgrazing is a major cause, while in others the primary cause lies with other types of agriculture. One of the major causes shown on the accompanying charts from UNEP/FAO is deforestation, but in increasing numbers of instances, deforestation itself is caused by efforts to make more land usable for either grazing by animals or the planting of crops - which increasingly is destined for livestock feeding.  See, for example, Livestock's Long Shadow.

Soil degradation also varies by type. Water erosion, for example, can be a consequence of many causal vectors. Weather pattern disruption can lead to excessive runoff that leaves behind large gullies and in the process removes vital nutrients from the remaining topsoil. The same consequences can arise from overuse of nitrogen-intensive fertilizers that require large quantities of water.

The primary causes and types of soil degradation thus differ around the world.

Causes of Soil Loss by Region

click image for larger view
Regional differences in causes of soil degradation are illustrated by the chart on the left. Compare the contribution by agriculture in North America, where industrial agriculture has been undertaken on a massive scale for several decades with South America where deforestation is the major culprit.

Again, when looking at percentages of soil loss due to deforestation, a more illuminating portrait emerges from a local examination of the underlying reasons for deforestation - for example, to make more room to accommodate urban population growth, to scale up export agriculture enterprises such as the planting of soya, or for grazing of cattle and other livestock.


For Some Other Ways of Classifying Soil Degradation, with Examples, See UBC's Soil Web

click image for link to EWG's Losing Ground
There is much debate about the precise rates of soil loss, but little debate that it is a problem and growing worse in many parts of the world, either due to the nature of the industrial farming techniques that place unbearable stresses on the land or due to the sheer quantity of land being converted to agricultural or animal grazing purposes. A report by the Environmental Working Group on what's happening in the heart of America's cornbelt illustrates what is at stake and the extent to which a business-as-usual attitude conceals one of the most important economic and environmental trends of the modern era.

click FAO image to enlarge
That the world is running out of usable soil is difficult enough to fathom, but the fact that some of the main options for meeting an increased global food production demand bring complex trade-offs in land use policy. On the one hand we might increase the amount of land devoted to agricultural use. That is known as extensification. Or we might further increase the yields we can obtain from the land already devoted to cultivation. That is intensification. Either way we are borrowing against the future of a finite resource. Intensification has led to massive soil depletion, but devoting even more land to similar intensive agricultural uses simply speeds up the aggregate loss of fertile soil available to feed a growing planet with a growing appetite for food production that makes large demands on soil resources. The FAO map (a) shown on the right hand side shows some model projections of extensification and intensification in Sub-Saharan Africa. For more information on the map and the further point illustrated by adjacent map (b) see the following paper on parasitology control.

But there is a further wrinkle highlighted in a paper presented by S.M. Smukler et al from The Earth Institute at Columbia University at the 2012 conference, "Intensifying agriculture within planetary boundaries."

The authors argue as follows. Without increased productivity on existing farmland in sub-Saharan Africa, extensification of agricultural production will likely be required to meet growing food demands.  But this would add to greater "climate forcing effects" that produce global warming. The forcing effects would be due to the increase of carbon dioxide (CO2) released from conversion of land to to farming uses. The alternative is to increase productivity on existing land. But that requires applications of nitrogen fertilizers that will likely increase the release of nitrous oxide (N2O), a greenhouse gas 310 times as powerful as CO2. The net climate impact of these two alternative development trajectories is complex and, as the authors note, "not well understood particularly in Sub-Saharan Africa, where yield increases are needed most." 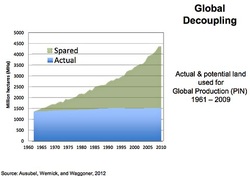 click image to enlarge
A somewhat more optimistic assessment of future land use and land degradation prospects is found in a 2012 study study, “Peak Farmland and the Prospects for Sparing Nature,” by Ausubel, Iddo K. Wernick and Paul E. Waggoner.  Many of the more pessimistic projections assume that the future will more or less resemble the recent past. Population will continue to rise; appetites will continue to grow for meat and other products that require more acreage to be placed into production; more cropland will be diverted from food production to biofuel production; and soil depleting, chemically intense farming methods will remain the norm. The chart at the right from the paper by Ausubel et al illustrates trends that inform their optimism.