More Introductory Information on these 6 Issues

1. What are the issues of justice posed by global economic development institutions and policies?

The policies, priorities, and practices of the major global economic institutions - e.g., IMF, World Bank, and WTO - are the subject of continuing debate among economists, philosophers, and most importantly, developing nations that are subject to its highly consequential rules but not very influential in their creation. Among the most controversial issues are the following:

2. What should be the focus of Developmental Agencies: GDP, Well-Being, Inequality? 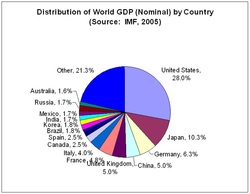 click image for larger view
GDP - Gross Domestic Product - is the traditional outcome metric of developmental economics. It is used widely as a benchmark of successful public policy initiatives and as the primary objective of the lending decisions of major global economic institutions. The idea, in a nutshell, is that improvement in per capita GDP is a useful synoptic measure of how well a society is doing. It measures the aggregate of economic activity within a country. More economic activity generated for whatever purpose - building prisons or schools, spending more on health care, whether or not it's medically beneficial - raises GDP.

Critics have long argued that GDP is a flawed metric of global development: (a) it fails to capture much of what we want to know about human well-being; (b) it registers as a positive achievement some economic activities that are detrimental to well-being; (c) it measures increases in economic activity that occurs within a nation but it fails to reflect how much of that economic gain stays within that country; and (d) in its emphasis on the maximization of per capita GDP it fails to take into account of the distribution of the economic benefits within that country.

Other criticisms include the charge that GDP per capita estimates can diverge significantly from subjective reports of well-being, and the judgment that other global economic measures such as the World Bank poverty standard or the Human Development Indicators are more important metrics for developmental institutions to take into account.

3. What factors cause or sustain global poverty? 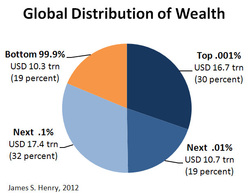 click image for larger view
Why are some nations rich while others are poor? Competing explanations abound.  Specialists working from within numerous academic disciplines defend claims regarding the sole, primary, or (more modestly) very significant causes of poverty. Differences in geography, culture and religion, local technological innovations, governance structures, and natural resource endowments are prominent examples of the major endogenous explanations. Others point to  largely exogenous or external factors such as the legacy of colonialism, the cross-border spread of pandemics, population migration patterns, misguided international aid initiatives, and the counterproductive lending and development policies of highly influential global economic institutions.

Almost all of the attempts to provide fundamental explanations address three questions: First, how some nations got an initial head start.  Second, whether the positive effects of that head start ensured longer-term prosperity through the present era. Third, whether an initial head start or some aspect or consequence of an enduring prosperity enjoyed by some nations is, in whole or substantial part, a cause of the current poverty of some other nations.

4. What impacts on economic and environmental sustainability are missed by an economic growth focus? 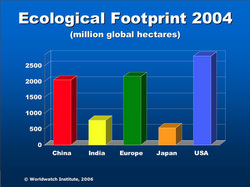 click image for larger view
Human beings have an enormous impact on the natural environment, and ultimately on each other. The way we chose to house, clothe, shelter, and meet the needs for vital resources such as food, energy, and water, not only affect the long-term availability of those resources, but equally, the way human beings interact in cooperative and competitive modes.

We can measure ecological footprints by an assessment of some share of global resources that are needed to support a particular type of lifestyle. We can measure specific things such as our individual carbon footprint or individual water footprint (see Water Scarcity). Or we can use broader impact measures to better understand the collective impact of certain forms of social organization, modes of production, or altering the natural landscape for the construction of population centers. Equally important is the assessment of the numbers of people the Earth's resources or some locale's resources can sustain, as are questions of population density and geographic distribution.

It turns out that there are quite a few useful ways to assess the human impact on the environment and the environmental impact on humans in ways that all of the economic measures and most of their major policy-driven alternatives fail to register.

5. What are the consequences of global proliferation of chemical hazards in lesser developed nations? 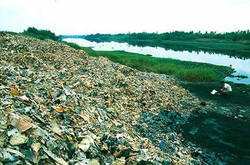 click image to link to electronicstakeback.com
Exposure to dangerous chemicals and toxic materials is a pervasive fact of modern life. There are familiar public policy issues: many well-known and not so well-known health risks, environmental degradation, and potentially significant economic benefits and burdens for current as well as future generations. What, then, makes these public policy issues matters of justice? Several points may be relevant.

6. When are extractive industries an economic and environmental curse for lesser developed nations?

click image for link to source: Maplecroft.com
Economists and astute observers of international politics and trade have long noticed that some poor nations blessed with natural resources - especially when blessed with large amounts of one scarce resource - often fare worse economically than other poor nations. This is known as the resource curse.

Why should the presence of rich reserves of resources be so commonly associated with poor economic performance and the perpetuation of poverty? It is reasonable to suppose that rich reserves of natural resources needed by the developed world would offer an exceptional opportunity to get out of poverty. However, the truth is that non-renewable resources invite exploitation from the outside, enable autocratic leaders and their cronies to finance their own lifestyles, and build up arms and infrastructure that allow them to remain in power through repression and elaborate systems of bribery and patronage.

The map from the website of Maplecroft.com shows their estimate of the countries where there is an abundance of natural resources that risks undermining economic development. The least risks are shown in green with risks increasing as the color shades through yellow, orange, and finally, red.

The entries under this heading describe much of what is known about the resource curse, provide concrete examples of the problem, offer suggestions for curbing existing and future instances, and provide some normative frameworks for understanding the underlying issues of justice at stake.