click image for link
The evaluation of options for the production and distribution of any one of these vital resources - food, energy, or water - inherently demands that we take into account the resource implications for the other two. Decisions we make with regard to water, for example, can have significant implications for both energy and food production.

The significance of these interrelationships is magnified by the fact that we are running out of non-renewable energy sources, degrading the land and water resources necessary for food production in an era of increasing food insecurity, and we are facing an unprecedented challenge in meeting the water needs for a global population of over 7 Billion people and likely to reach beyond 9 Billion by 2050.

The discussion of how these three issues are linked has begun in earnest within the global security context, as well as among those engaged in projections of global economic opportunities for investment, such as the World Business Council for Sustainable Development and the South African Water, Energy and Food Forum. Also, there is the Federal German Republic's cross-disciplinary, multi-stakeholder initiative for addressing the trio of issues simultaneously. Public policy decisions in each domain can not proceed in a thoughtful manner if each is treated as a separate sphere of expertise, defined by its own clearly delineated, discrete set of social, economic, and technical concerns. The graphic above, with its focus on food security, is illustrative of the kind of cross-disciplinary thinking emerging in some circles.

The FEW Problem in the Broader Context of Global Justice

click image for info
Thus, it seems that there are many ways this trio of issues might be framed, but the central organizing theme for this website is how they figure within a framework of global justice.

While there are always winners and losers in every global market transaction and in every geopolitical negotiation, there are larger systemic concerns that go well beyond the calculus of interests in routine bilateral interactions of both sorts. The deeply intertwined nature of the global economy and the concentration of political and economic power in the hands of fewer and fewer entities means that a few major global actors can exert a profound and pervasive impact on the most basic life prospects of everyone on Earth.

The changing global order, in which food, energy, and water issues are dealt with increasingly on a global rather than merely local scale, poses an increased risk that some of the world's poorest, most vulnerable, and least powerful people will find themselves trapped in a densely woven web of systematic disadvantage from which they cannot escape but for heroic hard work, great good fortune, or both.

In a nutshell, the focus of the FEW problem is upon both public regulatory policies and private resource decisions that have the potential to systematically disadvantage many of the planet's most vulnerable and least powerful people. 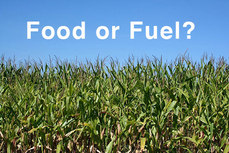 Click image for source: Stephanie Says, Flickr
We want to mitigate the accumulation of climate-change inducing greenhouse gases (GHGs) by switching to sources of energy other than fossil fuels, but many of the options have adverse or at least problematic implications for any effort designed to reduce global warming.  Many of our alternative fuel options carry their own environmental price tag. Many biofuels, on careful analysis, turn out to be worse for meeting GHG emissions targets than traditional fossil fuels. Some require more energy to manufacture than they make available for use in vehicles. Many also have the unwanted side effect of further destruction of forests and grasslands, which act as carbon sinks, absorbing GHGs from the atmosphere. In terms of energy policy alone, the switch to biofuels often turns out to be a self-defeating strategy. The search for new sources of energy from agriculture thus often provides no improvement in GHG reduction.

Moreover, biofuels have spillover effects into other areas of environmental concern. Biofuels displace agricultural crops grown for food, and in a world of increasing food demand and diminished soil and water quality, that puts pressure on our ability to be responsible stewards of our dwindling agricultural resources. Thus, the switch to biofuels poses new threats to food security.

click USDA image for larger view
A recent USDA study in the united States concluded that "food-related energy use based on 2007 total U.S. energy consumption and food expenditure data and the benchmark 2002 input-output accounts suggests that food-related energy use as a share of the national energy budget grew from 14.4 percent in 2002 to an estimated 15.7 percent in 2007.

The graphic on the right is from the same USDA study. This shows how the authors of the study estimated the energy contributions at each stage of the full life cycle of production to consumption. 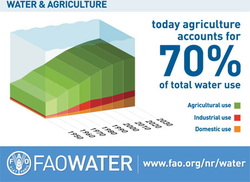 FAO Poster Graphic
Our modern industrial system of agriculture poses still further challenges both because of its impact on our ability to meet our needs for freshwater and because it is in itself an increasingly carbon-intensive enterprise. The use of fertilizers and pesticides that has been largely responsible for the massive increase in yield per acre since WWII, but it requires far more water per acre than traditional forms of agriculture.

Approximately 3,000 litres per day are needed to satisfy a person's daily nutritional needs - that estimate, of course, depends on the foods that are used to meet those needs. 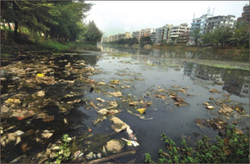 Photo: Save Our Earth
The US Environmental Protection Agency's Website claims that "agricultural nonpoint source (NPS) pollution is the leading source of water quality impacts on surveyed rivers and lakes, the second largest source of impairments to wetlands, and a major contributor to contamination of surveyed estuaries and ground water."

While primary causes of water pollution vary around the world, the EPA's estimate is consistent with findings of the survey of OECD nations, as well as findings by the Pew Environment Program, the 2012 edition of the United Nations World Water Development Report (WWDR4), and many other similar assessments produced by individual nations. 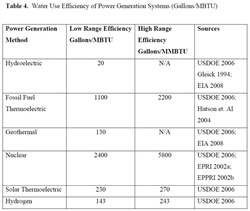 Click NRDC image for larger view
Many alternative sources of energy are water hogs as well. The use of nuclear power requires tremendous amounts of water for cooling facilities, and hydroelectric power plants and large dams have many adverse effects on local watersheds, often disrupting the hydrologic cycle in ways that reduce both surface water and ground water availability for many others, both upstream and downstream. Impact on plant and fish species is another worry about hydroelectric power generators. There are over 50,000 large dams in the world today - around half in China - and mounting evidence shows multiple negative impacts on water, land, and biodiversity.

Meeting our growing water needs - 2/3 of the world's population is expected to experience some degree of water stress by 2025 - is in itself a major environmental challenge. It requires enormous amounts of energy to pump, purify, transport, recycle, or desalinate water. Water production is thus an energy hog. Some estimates place energy production second to agriculture among the world's major uses of water. As the quarter of the world currently lacking in electricity moves beyond the state of severe "energy poverty" the amount of water expended for energy production is likely to increase.

Note for example, the high range of water usage for nuclear power generation. That figure is particularly significant inasmuch as nuclear energy provided 21% of the energy used to generate U.S. electricity in 2011.

This table from the National Resources Defense Council shows estimates of how much water consumption is associated with various forms of energy generation. 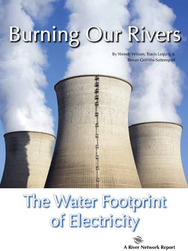 click image to visit source
Estimates of the amount of energy necessary for meeting our needs for water vary by geographic site, available alternatives, water quality, transportation and delivery arrangements, methods used at each stage of the process, whether it is for urban or rural use, whether it is for industrial, agricultural or household use, and so on. This is the bottom line of the recent 2011 GAO report, ENERGY-WATER NEXUS. The report noted some key variables that matter to energy and water policy in general: "For example, to help meet future demands for water and reduce dependence on imported water supplies in San Diego, the region is pursuing energy intensive seawater desalination, which can be 5 to 10 times more energy intensive than conventional processes to treat surface water and groundwater."  (pp. 14-15).

Burning Our Rivers: The Water Footprint of Electricity, a 2012 report by River Network attempts to summarize what is known about the water footprint of various modes of electrical power production. Here are some of their findings in the US setting:

For a quick look at these and other key findings presented in a concise form, you can read River Network's fact sheet.